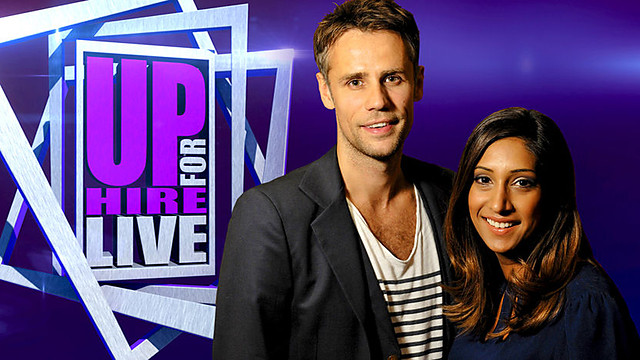 About Up For Hire Live

Out of work? Or worried about your job prospects? BBC Three looked at the issue of youth unemployment, head on.

On BBC Three and online, Up For Hire Live looked at how to get you to where you want to be. We followed our four recruits – Ben, Chris,Kirsty and Sacha as they completed the work experience of a lifetime. And we took a behind-the-scenes look at how seven of Britain’s best-known employers find new people – watching as they went through applications and interviews and hired their ideal candidate.

We ran exclusive posts on the BBC Three blog, where some famous faces revealed the secrets of their CVs. Young entrepreneurs, such as music channel founder Jamal Edwards, recalled their route to the top, while a pilot, a scientist, a TV director for EastEnders, and a plumber talked about their day jobs.

Some of the UK’s top companies took part in Up For Hire Live’s Careers Fair on Facebook. We used strict criteria to select the companies based on their size, diversity, social media presence and relevance to you, the audience.

My role was to devise, lead and implement interactive strategy for BBC Three’s Up For Hire. I was responsible for the recruitment of Britain’s top brands across relevant sectors for interaction with the Up For Hire’s social media platforms. Brands including Live Nation, Virgin Holidays, HSBC, IBM, TONY&GUY, BT, Coca Cola, O2, The Co-operative Group and Radisson Edwardian to name a few.