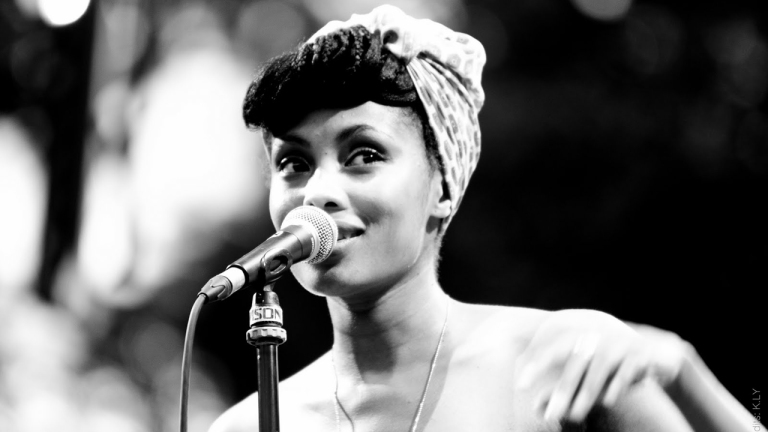 Born in France to parents from the Comoros Islands (off the coast of Mozambique), Imany is carving out a name for herself as a soul singer.

We spoke to the former model about her new album The Shape Of A Broken Heart, life as a model in Paris and NY, and baking pecan pie. Lorraine Pascal, you’ve got competition!

You have a unique sense of style. What is the inspiration behind your image?

I’m inspired by what moves me – not fashion necessarily. I always wear a scarf because it’s a very strong accessory, it’s says I’m a proud black woman!

You worked as a model in Paris and New York. How was that?

I was with Trump in NYC, FORD in Paris. Modelling was fun at times and rough some other times. The good thing with the rough times: it gives you space to reflect on your life and the direction its taking… Without the rough times I probably wouldn’t have got into music.

What item of clothing can you not live without and why?

A pair of jeans and a pair of Reebok Classics. The reason is I’m a tomboy at heart and jeans go with everything. And as for Reebok Classic, it makes feel like one of those ‘80s dancers – I always wanted to imitate them as a little girl!

Why is your track called The Shape Of A Broken Heart?

I always wanted to improve the way I draw, so one day a friend of mine who’s a designer suggests that I close my eyes, think of something and let my hand do the drawing. At that time I was thinking of the African continent. When I opened my eyes I realised I drew a broken heart. Then, it hit me: when you look closely, Africa has the shape of a broken heart. From that, a song was born.

It’s the most poetic title of all my tracks, so I made it the album title.

How would you describe the sound of the album?

It’s acoustic, organic… I didn’t want it to be marked by either time or genre. I wanted to be timeless. It supposed to take you on a journey.

For people who aren’t familiar with Imany, what song would you recommend they listen to first?

It’s a very hard question! I don’t know because the album speaks to a wide spectrum of people… Probably You Will Never Know, and then I would move on to Seat With Me or Grey Monday.

What was it like filming the music video for You Will Never Know?

The video is the first episode of a sequel. We shot three movies in five days and it was intense! We didn’t have any makeup artist, stylist or hairdresser – I had to do it myself. So it was quite challenging, but I loved it! It gave me confidence… Andrew Dosunmu directed it, Bradford Young did the photography – it was very instructing as they both very talented. I learned a lot! I can’t wait to see the other two episodes.

What are your plans for the rest of the year?

The album just came out in France. I’m touring all over the place right now. Then that I’m going after Europe and the rest of the world, hopefully!

Who are your musical influences?

I have many influences. As I didn’t grow up in a musical environment, I made my own… It goes from Tracy Chapman, Ben Harper, Janis Joplin, Nirvana, Amos Lee, The Wu-Tang, Tupac, Lauryn Hill, Nina Simone, Billy Holiday…

Who would be on your dream collaborations wish list?

I wouldn’t mind to collaborate with Ben Harper…

What would you consider your greatest success?

As a young girl, I was very ashamed of my voice and yet I secretly dreamt of one day being a singer. I overcame what [I] considered a flaw and made it into a quality. Took me a long time but now I think it’s my greatest success…

What was the first record you ever bought?

I don’t remember, but maybe a Public Enemy record!

When you are not performing, what are your hobbies or interests?

I love to hang out with my girlfriends and gossip! I’m a very greedy reader. I also love to catch a movie by myself. When I have time and cash I like to go snoop around secondhand stores and find the unique dress nobody saw! What else? I like to write short stories and I’m a pretty decent pastries maker – I make a mean pecan pie! I love to entertain and cook for my friends and family

Most proud of…my little brother Ben who is growing into a very fine man. I consider him my son. He’s bright and funny. I’m his biggest fan!